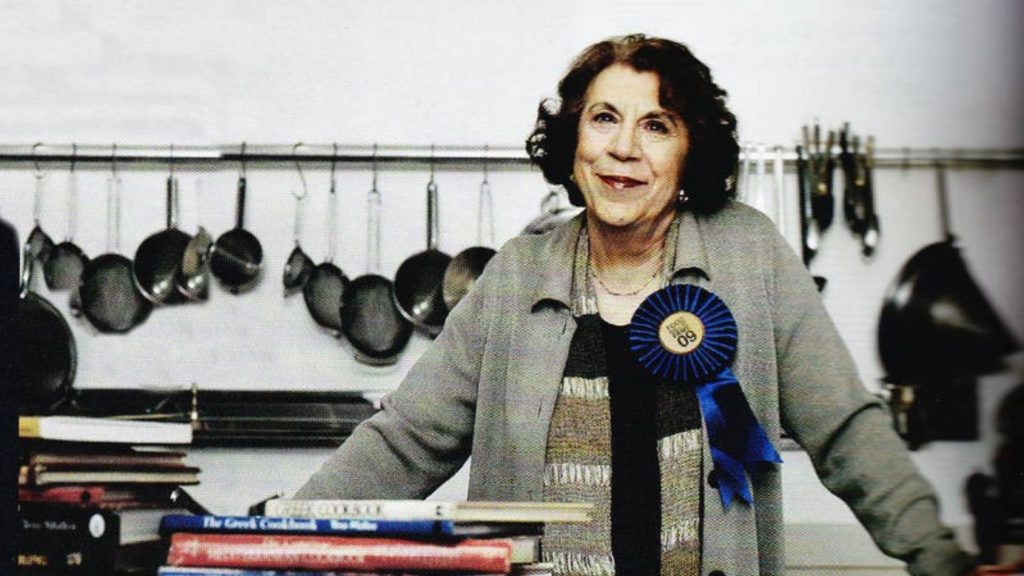 The list wouldn’t be complete without the late Tess Mallos. Photo: NK Archives/Supplied

The Greek Australian has established himself as one of the country’s most exciting chefs and restaurateurs, recognised by esteemed publications the likes of Good Food, The Australian, Monocle and Gourmet Traveller. Barthelmess is behind Greek-inspired The Apollo in Sydney and Tokyo – the first Australian Greek restaurant to open in the area, along with Cho Cho San in Potts Point and Greca in Brisbane, for which he collaborated with interior designer, fellow Greek Australian George Livissianis, to create a polished Greek village setting. He has since confirmed that he is opening up another venue in Brisbane this year, taking the form of a Japanese izakaya.

Nobody does dessert like pastry chef Anna Polyviou. Easily recognisable by her trademark Mohawk, the Greek Cypriot Australian dessert queen kicked off her career at Hotel Sofitel in Melbourne, where she was named best apprentice in Victoria taking her on to Claridges Hotel in London. She then went on to win the Awards of Excellent best dessert in the UK, leading her to Pierre Herme’s famous Paris Patisserie. Polyviou was later hired by Sydney’s Shangri-La Hotel where she developed unique and exciting Dessert Degustations that had people looking at sweets in a whole new way. In 2014, her modernist take on the traditional carrot cake won best dessert in Australia. Since then she has gone on to feature on MasterChef Australia, and has published her own cookbook, Sweet Street.

READ MORE: Anna Polyviou is making a mess and she loves it

Peter Conistis is considered to be the pioneer of modern Greek food, and gained world-wide notoriety when he was invited to cook at the opening ceremony of the Olympic Games in Athens in 2004. The Sydney-based chef is known for his restaurants Cosmos – which received a chef’s hat after just three months, becoming the first Greek restaurant to be awarded a hat and to be mentioned in the Sydney Morning Herald Good Food Guide, as well as Eleni’s, and Omega. In 2007 he was appointed executive chef at the Civic Hotel. Most recently he is known for his work at Alpha Restaurant in Sydney’s CBD. He has also published cookbook New Greek Cuisine, and was involved in Maeve O’Meara’s Food Safari tours to Greece on SBS.

Melbourne-based chef Matt Germanchis has made a name for himself both in Australia and internationally, having worked in Heston Blumenthal’s Michelin-starred The Fat Duck and Hind’s Head, as well as local Cafe Grossi, Pandora’s Box, MoVida and Pei Modern. He has since set himself up down Victoria’s coast, together with partner in business and life, Gemma Gange in their latest culinary venture, Captain Moonlite, breathing new life into the Anglesea Surf Lifesaving Club. In his early days as a chef, the Greek Australian worked on the island of Skiathos, and wanted to bring Greek island inspired dining to Australia.

While not a chef per se, very few are as passionate about food – and the Greek cuisine in particular – as Kathy Tsaples. She grew up learning to cook traditional food from her mother from recipes passed down from generations. Kathy has since gone on to open up Sweet Greek, a little shop located in Prahran Market selling delicious house made savoury and sweet dishes made with the finest seasonal produce. She has also published two cookbooks, Sweet Greek and Sweet Greek Life, and has had several TV appearances.

Everybody wants a piece of David Tsirekas these days. Since being awarded his first Sydney Morning Herald Good Food Guide hat in 2001, the Sydney-based chef formerly behind Perama, Xanthi Bar, and 1821 has gone on to spread his wings beyond the Harbour city. He has been brought on board as chef in residence for Nostimo Restaurant & Bar in Brisbane, and also for Zeus Street Greek. Tsirekas has also been sharing his twist on Greek flavours in the United States, overseeing the launch of two modern Greek restaurants in Chicago.

Born in Athens, Chef Yiannis Kasidokostas now calls Australia home. With 26 years of experience under his belt, his love of cooking started at a very early age. It was at just 15 that he decided to study at the Culinary Arts School of Athens and its sister school in Lyon, France. His first job while studying was in a classic French restaurant. At 19 he was given his first Sous Chef position, and by 21 was a Head Chef. He went on to work at two Michelin Star restaurants, before opening his first restaurant at 24. But when the financial crisis hit Greece, he made the decision to venture to Australia where he worked in the kitchens of Elyros, Ca De Vin and Elia before opening the doors to his own Greek-inspired restaurant Sowl in 2018.

While not a chef, this list wouldn’t be complete without Tess Mallos. The Greek Australian was a food writer, journalist and commentator, who wrote a number of books on both the Greek and Middle Eastern cuisines, with the first published in 1976, titled the Greek Cook Book featuring recipes from her heritage. She began her career in cooking as a freelance food consultant in advertising, creating and writing recipes, and preparing food for photography. Mallos also did cooking demonstrations on a number of Aussie cooking shows. She passed away in 2012, aged 79.

Philip Vakos first made a name for himself after making it on to MasterChef Australia as a contestant. His love of food was inspired by his two Cretan grandmothers, and after cementing his passion on the show, decided to move from Tasmania to Melbourne, where he opened up Bahari in Richmond, and more recently catering company The Gringlish Co. with his wife Heleena Alatsas. He has also made many media appearances, and a number of cooking demonstrations at high profile events.

George Calombaris may not be a very popular figure at the moment, following revelations that his company Made Establishment underpaid staff $7.83 million. But there’s no denying the impact the Greek Cypriot Australian has had on the Australian dining scene. The former MasterChef judge was named Young Chef of the Year at just 24 while working at Reserve at Melbourne’s Federation Square, and in 2004 was voted as one of the Top 40 chefs of influence in the world by the Global Food and Wine Magazine. He then went on to open The Press Club (now Elektra), Maha Bar and Grill, Hellenic Republic, St Katherine’s, Mama Baba and Jimmy Grants. In 2008, he opened his first international restaurant, The Belvedere Club in Mykonos. Calombaris has also published five cookbooks.